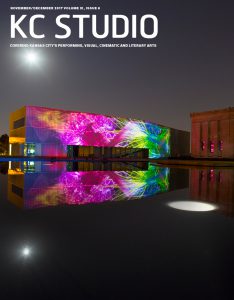 KC Studio magazine’s mission has grown exponentially since its inception due to a sharp decline in arts journalism nationwide, particularly in newspapers.  The importance of such coverage was highlighted in a recent Wallace Foundation initiative granting $52 million aimed at audience growth for 26 arts organizations in other parts of the country:  “Experienced journalists are being squeezed out…this gap needs to be filled or the transmission of arts news is likely to weaken demand for the arts.”  President of the Wallace Foundation, Will Miller, said the grants were intended to help institutions reach more people at a time when “attracting and engaging new audiences is challenging for arts organizations because, even as the number of arts groups has grown, national rates of participation in the arts have declined, arts education has waned, and competition for ways to spend leisure time has increased.” – The New York Times, “$52 Million Push to Help Arts Institutions Find New Audiences,” April 15, 2015.

KC Studio’s first bimonthly edition premiered May, 2008 and the publication has gone through many changes, while our mission has remained audience building on behalf of performing, visual, cinematic and literary arts, large and small, in the metropolitan region.   Since its inception, KC Studio has covered over 2,200 organizations or independent artists with feature articles.  Consistent with our mission to form on-going partnerships, KC Studio and KCPT Arts Upload have collaborated with curated features in the magazine, on television and Flatland in 2016.

The year 2015 brought great opportunity for KC Studio with the hiring of Alice Thorson, art critic for The Kansas City Star for 22 years, as the magazine’s editor. Over the past 18 months, Thorson has heightened KC Studio’s expertise by consolidating a roster of respected critical voices, including Libby Hanssen, (classical music and dance), Robert Butler (film), Elisabeth Kirsch (visual arts) and Robert Trussell (theater). She has also introduced specialist columns by Julius A. Karash (arts and business) and Susan Schmelzer (arts policy). Other improvements Thorson has made to the magazine are regular cartoons by Tom Toro, whose work is also found in the New Yorker, New York Times, Harvard Business Review and Audubon, and the hiring of Jim Barcus as KC Studio’s staff photographer.

Support for the Arts Engagement Foundation of Kansas City will allow this growth to continue, while maintaining uncompromised editorial integrity.